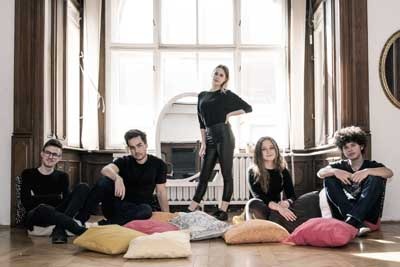 A young, ambitious artist, Nuša Bezjak is active under her stage name JUNE. To mark the 10th anniversary of the death of the great British artist Amy Winehouse, she devised a special project. The one-of-a-kind voice and life story of the five-time Grammy Award winner served as inspiration for the young musicians to join forces and recreate the hits of this unforgettable English musician.

After years of gaining experience, Infected first drew attention to themselves in 2016 when they won first place at the Rock Vizije young rock bands festival in Nova Gorica. After the Battle of Bands in Maribor and the Špil League in Kino Šiška, they released their first original song Miselne ceste, accompanied by a video, in 2018. The song represented only a fraction of their Kolaž album, which they premièred in December 2018 at the Kino Udarnik in Maribor. In 2019, they performed – as winners of a competition – on the main stage at the Croatian INmusic festival, and later spread their musical infection through Slovenian living rooms as part of their Tour de Kauch. Infected are a young band who don’t want artificial restraints – neither by genre nor by confession.

Joker Out, a five-piece band from Ljubljana, have been rocking the Slovenian scene with their Shagadelic rock ‘n’ roll and aesthetically sophisticated videos. Riding the wave of success of their first radio hit, they issued a new single in the spring of 2020 titled Vem da greš, which also announced their first full-length album Umazane misli. In addition to winning song of the week, it earned them a legendary performance on the roof of Radio Slovenija which further legitimized their place in the vanguard of the new wave of Slovenian music. They are now performing at larger and larger concert stages across Slovenia, joined by some of the biggest names from Slovenia and the Balkans (Big Foot Mama, Siddharta, Hamo & Tribute 2 Love, S.A.R.S., etc.)