The band Generator was established in May 2016 in Novo mesto. Their music is a combination of jazz, groove and fusion with punk attitude. Their special melodies stay in your heads for a while after the concert.

The versatile musicians, guitarist Matjaž Dajčar and multi-intrumentalist Marko Korošec, have, after long years of collaborating and working on different projects, created songs for a new original project/album that will already see the light of day this year. At the following concert they will present the work of their upcoming album, which they will record in july. The two will be joined by two more reknown musicians, austrian drummer Klemens Marktl and slovenian saxophonist Jaka Kopač.

Golden Frets is a group of young musicians playing rock music. They come from Ptuj and the surroundings. Their leader is young, 14-year old guitarist and singer Luka Gašperič, who has performed in various competitions in electric guitar and amazed judges and public.

At 11.00 am, Home of Culture Muzikafe, Free admission

The backyard of Muzikafe will once more hold a vegetarian basar, this time the 9th in a row. You may expect a various collection of vegetarian foods that shall convince everyone.

Enigma of spatial topography of the sound is an acoustic art performance, where sound is structured by the movement of physical bodies.

Dušan Fišer is an academic artist. He gained his degree at the Academy of Fine Arts and Design in Ljubljana and continued his studies in Groeningen, Vienna and Paris.

Jazz ladies are five female musicians, joined together due to their love for jazz. They captivate the audience with their music covers of the 60s, 70s and today. They play jazz, bebop and swing standards, Slovenian popular songs and some Latin music. With their nostalgic music, Jazz Ladies bring us back to the American smoky bars of the 60s.

This is a story of a miraculous child who has become one of the greatest violinists of his generation. The story is known to almost every fan of classical music. He made his debut as a soloist with an orchestra at the age of five, received an award at the international violinist competition of Jaroslav Kozian at seven, and performed for Ronald Reagan at the age of 10. He has performed twice for the late Pope John Paul II. He has been playing in the concert halls throughout Europe, Asia, America and Australia for decades. He has performed with the Berlin and Helsinki Philharmonic Orchestra, French Radio Orchestra and the Bolshoi Theatre. Milenkovich plays a 1783 Giovanni Battista Guadagnini violin. At the Arsana Festival he will be playing alongside piano virtuoso Vladimir Miloševič.

Young musicians, who learn to play the guitar and other instruments in the music school INSTRUMENTAL.KO and vocal school Arsana, formed two music groups, Brotherhood and Ironic. The aim of both projects is for students to gain self-consciousness, creativity, learn how to make music in groups and perform in front of the audience.

An American a-capella group Take 6 is considered to be the most often Grammy nominated group in history. The group consists of six exceptional and sophisticated voices, united in a crystal harmony, which, through its purity, syncopated rhythms and funky grooves, brings us to the wonderful world of gospel, R & B, jazz and pop. Take 6 has won 10 Grammy Awards, 10 Dove Awards, 2 NAACP Image Awards and one Soul Train Music Award. Their album Iconic reached #1 on the American contemporary jazz billboard in 2018. The number of prizes can be compared to the musicians such as Stevie Wonder, Ray Charles, Ella Fitzgerald and Whitney Houston.

Špela and Aleksander are working on acoustic adaptations of famous pop and rock songs. Their ideas derive from pop, classical and jazz music, representing the songs with a fresh view. They are perfectly complementary with their mastery of the instruments and vocals. We will hear music of Bruno Mars, Ed Sheeran, latino music alongside gentle and sensual ballads.

Majcen quintet is an international cast, joined around the trumpeter Boris Majcen. They play his original music, influenced by various jazz periods, such as swing, bebop, hard bop, etc. Musicians met as students at conservatoriums and academies in Austria and started playing together.

Tadej Toš is a genuine stand-up comic and an actor from Ptuj. He is also an old friend of Festival Arsana. Each year, he surprises us with new original stories. Toš ridicule the seriousness of human reality, which, as he puts it, is one of the ways to defend ourselves from automatization and brutal robotisation of our lives.

Jazz ensemble from the Jazz department of Music School Karol Pahor Ptuj has a goal to learn and play the music from the record Soul station of saxophonist Hank Mobley. They also play jazz standards and hits of the genre of bebop and hard bop, written by S. Rollins, J. Zawinul, M. Davis and other important compuser.

Duo Dendrocopos are two  unique  percussionists,  Jan Čibej and Luka Poljanec, both students of the Academy of Music of the University of Ljubljana. They participated in many competitions; the most prestigious one was International Percussion Competition in Luxembourg (IPCL) in Luxemburg, where they won. They play repertoire of Mullenbach, Morag, Strawinsky, Scarlatti and modern composers.

Jure Pukl is a world renowned saxophonist who mainly works in New York. He gained his education at the University of Vienna, conservatorium in Haag, at Berklee College of Music and at the University of Music and Performing Arts Graz, where he gained his master’s degree. The Guardian wrote that he’s a rising star of  a creative new generation that is energetically driving the music into its second century. On the stage, he will be joined by extraordinary Robert Jukič, par excellence drummer Howard Curtis and world renowned saxophonist Melissa Aldana. 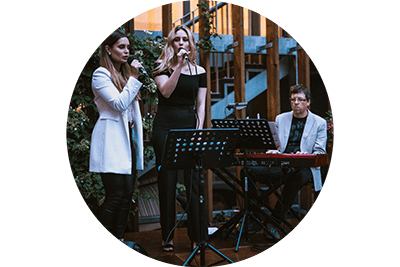 The stage of the youth will host singers of vocal school Arsana, who were finalists of various singing competitions this year. In the gleam of summer night we will enjoy famous melodies of film, pop, rock and r’n’b music.

Musical Fantasies of Harmony is structured as a classical fairy tale with a pinch of original music, acting, dancing, humour, and love. The students and teachers of Music School Karol Pahor Ptuj, soloists and chamber music groups walk through various musical genres. Libretto is written with emphasis on pedagogical value, to show children that musical theory is not a »bogeyman« and that the villagers of »Musical Stave« are actually very likeable.

Nuša Bezjak is a 16-year-old singer from Ptuj, who started her musical journey as a little girl and soon joined Vocal school Arsana. She continues her academic path at the Ljubljana Music and Ballet Conservatory, the study programme Jazz singing.

Zagreb Chamber Orchestra has a rich tradition of performing baroque, classical and contemporary music. It was established by Rudolf Matz in 1937. They work with soloists, such as Maxim Fedotov, Monika Leskovar, Galina Petrova, Francois Weigel etc. They are proud to work together with Maxim Fedotov, who is an honorary leader of the orchestra and art director of the festival Musica Maxima.

Boštjan Gombač and All stars orchestra perform original music, written by a conductor and composer Lojze Krajnča and Boštjan Gombač. Boštjan Gombač is a multi-instrumentalist, a theatre, film and television composer, he is a master of wind instruments such as clarinet, tin whistle and ocarina. He also plays on a musical saw, bodhran drum and theremin, and a great deal of other unusual instruments and sounds that are rarely seen on Slovenian stages. Above all, he is known for turning everything that gets into his hands into a musical instrument and extracting miraculous sounds from it.

Blaž Vidovič  and  Blaž  Hameršak,  two  musicians with more than a decade of experience, will present themselves as a duo of a vocal and a pianist. They perform covers of popular songs, from Make you feel my love to Želim si na Jamajko.

Solent Duo are Colombian soprano Meliza Metzger Gomez and Slovenian guitarist Mario Kurtjak. They both graduated from the Royal Academy of Music in London. They are especially interested in discovering the mysteries of a repertoire for coloratura soprano and guitar. Their music is about love and cherishes composers, such as Donizetti, Mozart, Schubert, Fauré and Gounod.

Denise Dantas is a Brazilian singer and actress who created a unique style of music, combining traditional Brazilian and Mediterranean music, full of exotic rhythms and sensuous energy. Her music expresses multicultural dialogue of southern Europe and her home, Bahia. For the past 20 years, Denise has been living in Europe, between Italy and Slovenia, striving to expand Brazilian culture in Europe.

At the closing concert, participants of the summer music camp will appear as soloists and musical groups. We will hear famous hits of pop, rock, jazz, blues and other genres.

Famous intro to We Will Rock You, hypnotic polyphony in Bohemian Rhapsody and enthusiastic refrain of We Are the Champions are the trademark of the greatest rock band of all times. This year’s festival will commemorate the legendary Queen with one of the greatest tribute bands in Europe, Queen Real Tribute Band, which consists of professional musicians and fans of the band Queen. They pay respect to the band and preserve the memory of the legendary Freddy Mercury.

Nika Gorič is one of the rising stars of Slovenian classical music. She graduated from the Royal Academy of Music in London, where she was awarded Queen’s award for a student of the year. She debuted in Slovenia in 2016 as Norina from Don Pasqual of Donizetti. Since then, she has performed in many operas, at Salzburger Festspiele, she performed with various worldwide known orchestras and in several prestigious halls, such as Wigmore Hall and Kings Place and at BBC Radio     3, where she performed Bach’s cantata Ich hatte viel Bekümmernis.

Last year, two artists, Aleksander Fenos and Srečko Molk joined their art and created a joint exhibition called the Dialogue. This year they are preparing second edition of this cooperation. They use wooden elements to create female acts, using the art and the forces of nature in a dialogue.

Tabu is one of the most popular Slovenian bands. They celebrated their 20th anniversary in the past year. Ever since their first album, they have been breaking all the records on Slovenian music scene. Singles of the first album are timeless and still fill all generations of listeners with excitement. Their next album Male nore ideje was certified platinum. Single Poljubljena was the most often played song in both 2010 and 2011. For the 20th anniversary they prepared a tour and double best of album. At the Festival Arsana, they will amaze us with their newest, unplugged project Izštekani.

Primož Vidovič is a philosophy graduate who spends his time making and remaking music. In the past year he performed in a musical Fantasies of Harmonies and sang with Toti big band at a summer event in Ptuj. His new project is a cover project of the music of Frank Sinatra. He will be accompanied by his musical guests to contribute to a timeless music of this eminent singer.

GML Trio plays original music with a strong influence of hip hop, jazz and improvised music. The trio was created due to the common interests of members for the spontaneous creation of music in which they can combine their love of rap and hip hop with academic jazz that all members study. Members met five years ago at the Jazzinty International Workshop and have played together since then. All members study abroad and play both on Slovenian and international stages.